Just added to your cart

The Tradition of the Wedding Veil from Early to Modern Times 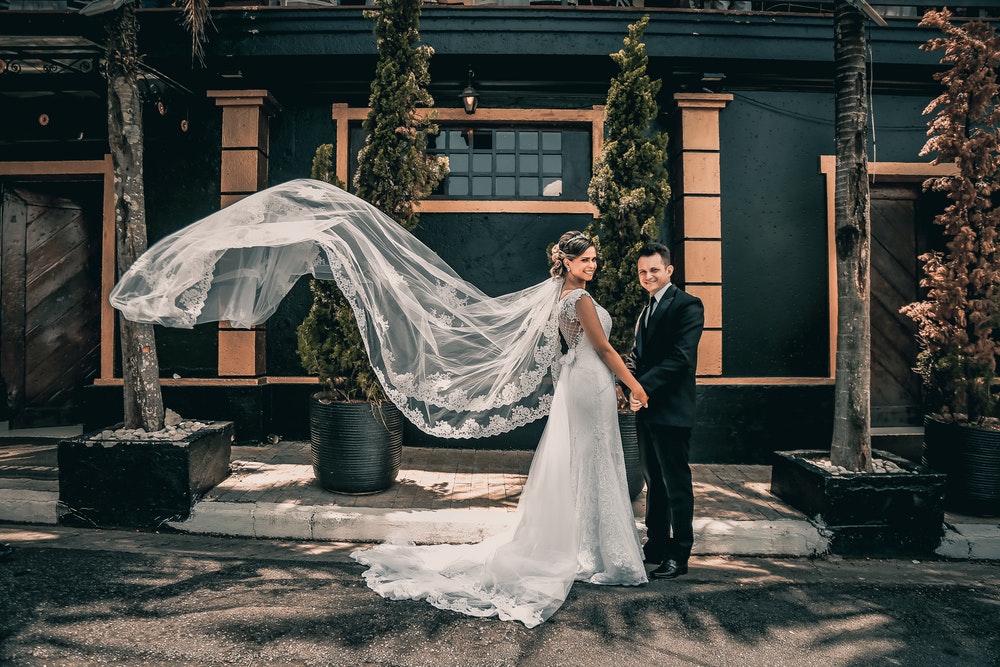 Planning what to wear on your wedding day is such an exhilarating process. Many brides already have an idea what wedding dress styles flatter their figure and how they want to look on such a momentous day. Whether or not you’re engaged, you’ve probably conjured images of your wedding day many times, refining the elegance and details over the years. From the perfect dress to the exquisite accessories, no doubt you’ve pondered it all.

If you’ve ever wondered why the wedding veil is the quintessential bridal accessory, we’ve got you covered. Wedding veil styles have changed over the years, but the significance remains. We’re taking a dive through the decades to take a look at how veils have altered over time.

The Origin of the Wedding Veil

Dating back to ancient times, brides were veiled for a number of reasons. Thought to be susceptible to enchantment, brides were concealed beneath flame-colored veils to scare away evil spirits and to shield them from harm. Yellow and red veils also honored the God of marriage ceremonies, Hymen, from Greek mythology, who was often depicted in art as a young man with a garland of flowers and holding a burning torch. Supposedly, if he didn’t attend the ceremony, the marriage was doomed. More practically speaking, when arranged marriages were common practices, the veil hid the bride from the groom and was only lifted after the ceremony concluded to ensure there was no turning back. Others believed it was a ‘right of passage’ for the veil to be lifted by the groom.

The concept of a white wedding veil and white dress was canonized by Queen Victoria, who wed Prince Albert in 1840. She wanted to wear the color white to highlight the intricacy of her lace gown and instructed “no one else wear white to the wedding” except for her bridesmaids. This concept has prevailed and defined the traditional bridal look for centuries. 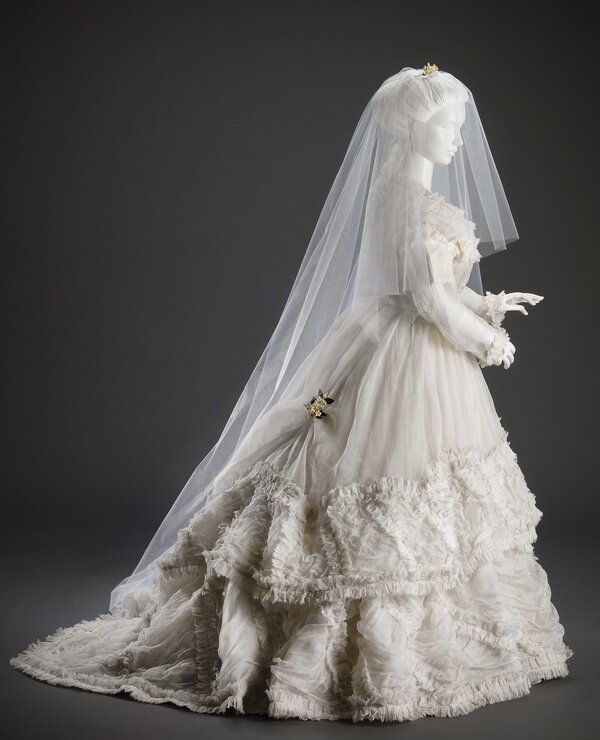 In the Edwardian era, veils were often made of lace, satin, or tulle and included a wreath of orange-blossoms, after Queen Victoria. Towards the turn of the century, longer and more elaborate veils became popular with a cap headdress. 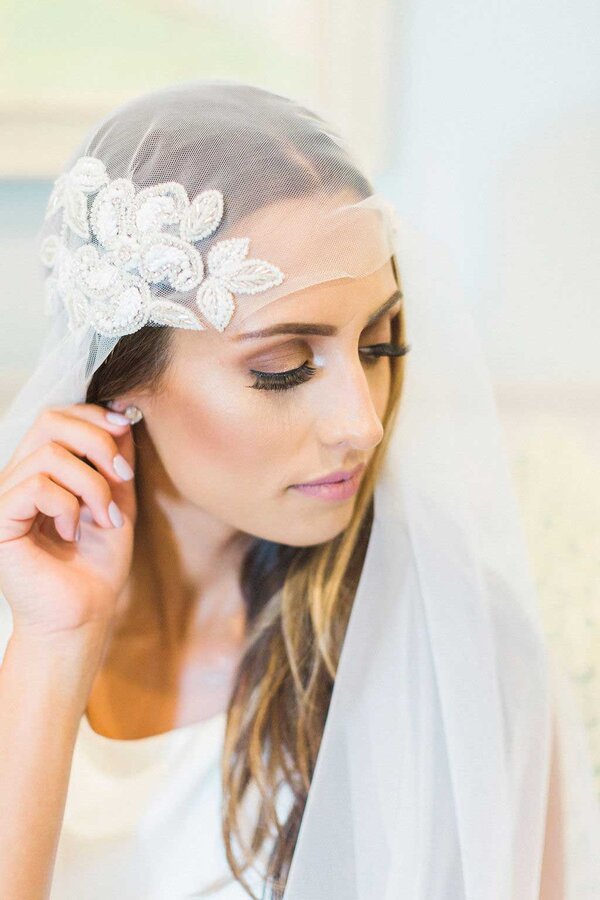 Entering the roaring '20s, America was prospering after World War I. New cultural trends were emerging alongside the advancements of “modern” technology such as the automobile, telephones, and moving pictures. This era was all about glam, and has been an inspiration for wedding themes ever sense. The notorious flapper trend definitely impacted brides getting married in the 1920s. Many brides wore cloche cap headdresses with veils attached at the back, some with lace, and others encircled with flowers. During the '20s, some veils were made with silk and decorated with flowers, but most were made from sheer material due to the fabric shortage from the war.

The timeless vintage classic, the Juliet Cap wedding veil, started gaining popularity in the '20s and really took over the bridal industry in the '30s. Following the economic crash in 1929, there was a return to simplicity. The Juliet Cap veil was the most popular trend amongst brides, with fewer embellishments than the decade before, and loosely worn veils flowed with simpler bridal gown silhouettes. Bob haircuts were all the rage in the '30s, and the Juliet Cap veil’s length complimented this trend perfectly. 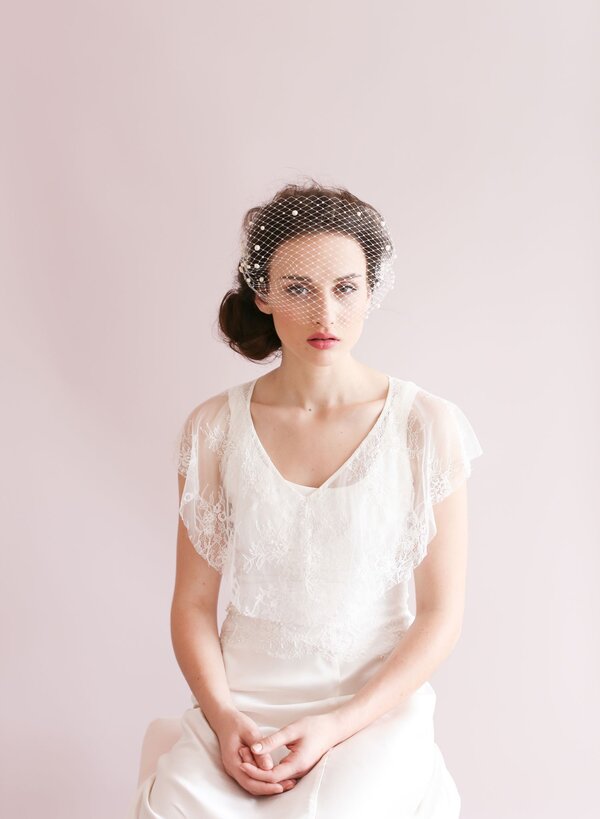 With World War II taking over the first half of the 1940s, America was once again met with fabric shortages, forcing brides to get creative. Many resorted to making their own veils from lace curtains or other furnished fabrics found. Many of the veils in the '40s were shorter shoulder-length styles made with less material, simplicity being the goal. The birdcage emerged, being short and flirty, covering just half the face from the forehead to the nose. We also saw the emergence of bridal hats, especially amongst brides who were getting married quickly while their partners were on leave from the military.

By the 1950s, America had mostly recovered from World War II, and everyone was hyped up on the American Dream. Pop culture trends were changing, and glam was coming back. Statement accessories dominated the decade, and brides were all in. During the '50s, waist-length veils were popular because they accentuated the waist and complemented the fashionable tiny-waisted gowns of the decade. Tight-fitting skullcap veils, which were essentially rounded brimless caps fitted around the crown of the head, became very popular. Birdcage veils maintained popularity in the '50s, too. 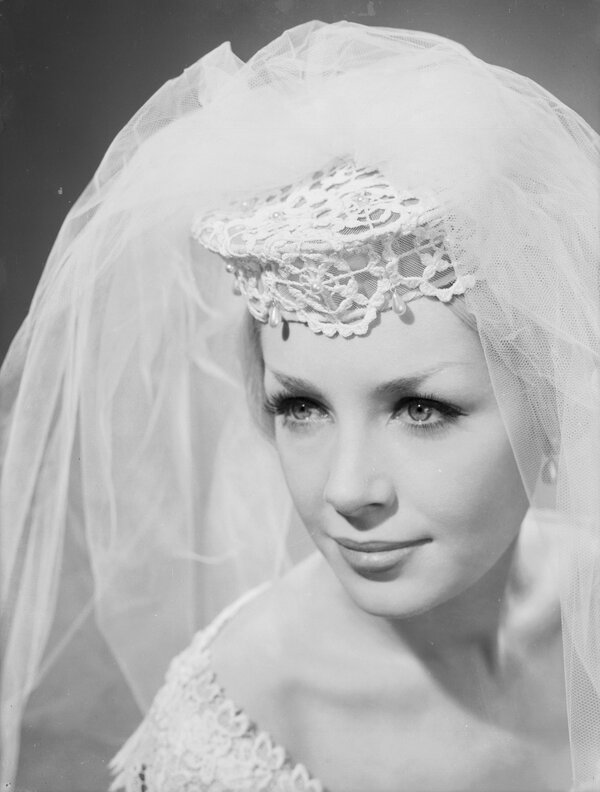 The counterculture of the '60s didn’t trickle into bridal industry trends as much as you would think. While the world was embracing bright colors, gogo boots, and mini skirts, the wedding industry remained elegant and proper, with some added height and volume. The Pouf veil, made from tulle or netting and attached to a hairpiece or comb increasing the veils height, gained a lot of popularity with modern brides. Pillbox hat veils made from synthetic materials was another common option that added some volume and texture more minimally than the pouf veil. Beehive hairstyles with veils coming out from the back of the head was a new trend that many brides adored. Moving into the socially progressive '70s, flower-power and independence inspired bridal accessories. Modern, bohemian style veils gained a lot of popularity. Think minimal embellishments, long, floaty, and sheer. Alongside these airy veils, flower wreaths emerged, changing the bridal industry once more. 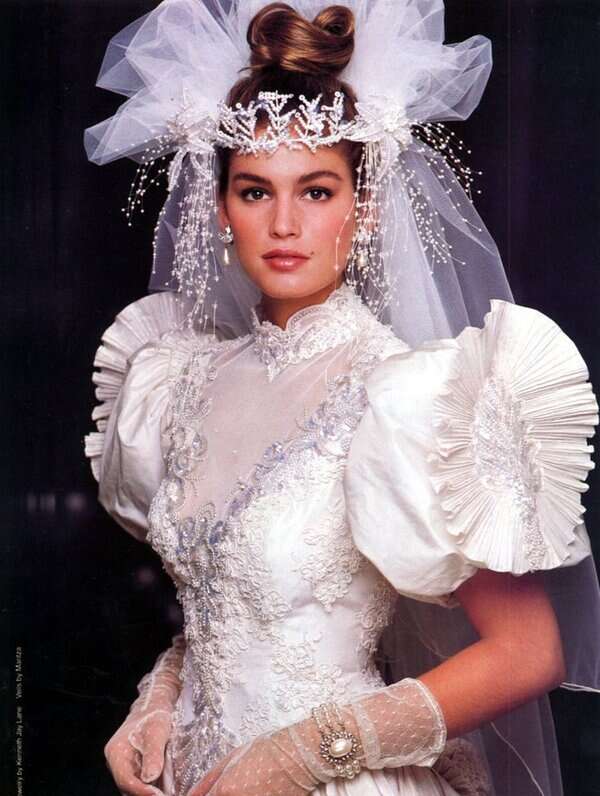 The motto of the '80s, “bigger is better,” dominated all aspects of feminine style and absolutely influenced bridal industry fashion. The veil is considered to be the final touch that completes the entire bridal look, and in the 1980s, that meant dramatic statements, embellishments, lace-edged frills, and dramatic lengths. Cathedral length veils became extremely popular, especially after Princess Diana’s wedding to Prince Charles in 1981. Her 24ft long veil became an inspiration for so many brides and is still iconic today.

When the grunge '90s came around, bridal fashion did a complete 180. The big, over the top looks from the '80s, were left behind, and there was a return to simple, basic, minimalist veil styles. During the '90s, traditional expectations began to fade as brides were embracing their own personal style. Some brides even opted out of veils all together and instead wore headpieces or hats. Many of the styles from the '90s have remained popular today. 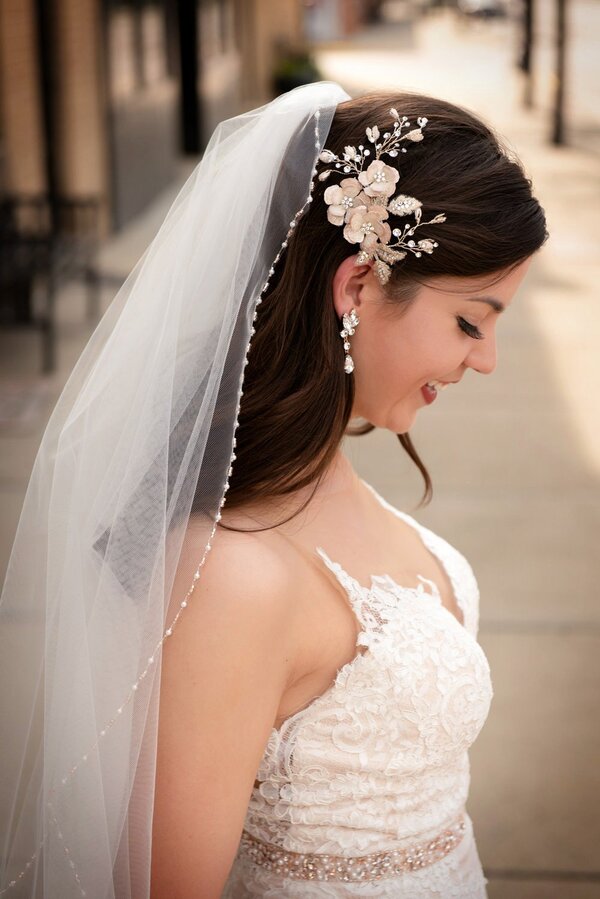 The turn of the century brought an explosion of crafty fun to the bridal industry. The 2000s are known for metallics, iridescent everything, and bright colors. These cultural trends absolutely trickled over into bridal fashion. Playful accessories and veils with textured embellished details were all the rage. Think long veils with intricate beading, crystals, sparkles, you name it! 2000’s brides were drawn to sparkly headpieces and clips too.

Loose hanging veils made a comeback in the 2010s, with special attention to detail. Brides wore scalloped silk veils, veils with lace edging, and even explored different colored veils, changing up the tradition for personalization. In fact, customization and uniqueness really began to take over during this decade. Brides have been creating their own bridal looks and drawing inspiration from the last century of styles. The '10s were all about personal style, choice, and a break from the traditional norms. 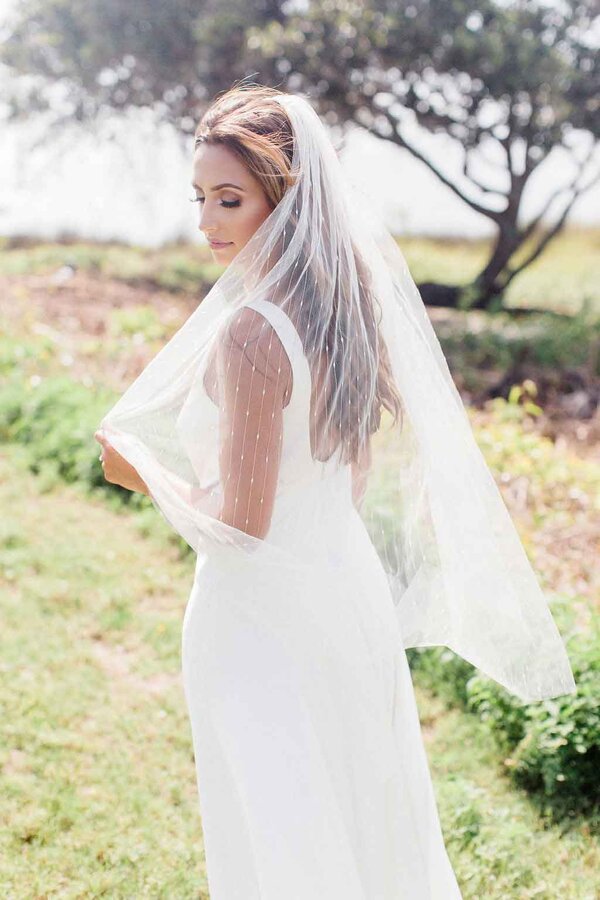 This brings us to 2020, the start of a new decade of trends. Brides are further embracing their unique style and experimenting with different options. With so many decades of inspiration to draw from, brides can choose to go vintage with a Juliet Cap veil, dramatic with an '80s inspired cathedral length veil, or bohemian with a flower crown inspired veil. This decade, we expect to see brides get more creative with their veil style to enhance the overall wedding look further. Alongside newer trends like colored veils, there has been a return to more romantic details and celestial embroidery as well. No matter where you fit on the scale of traditional to non-traditional, there are countless styles to help you gain inspiration and find the perfect veil for your wedding gown. Let Mauve et Blush help you create your perfect wedding. Explore veils in every style from floral designs like our Iris Floral veil, our Lily veil, our Camelia Veil our Poppy Veil, or exotic veils like our Juliet Cap, or Jasmine Veils.

Shop our collection of veils and adornments to find the perfect look! 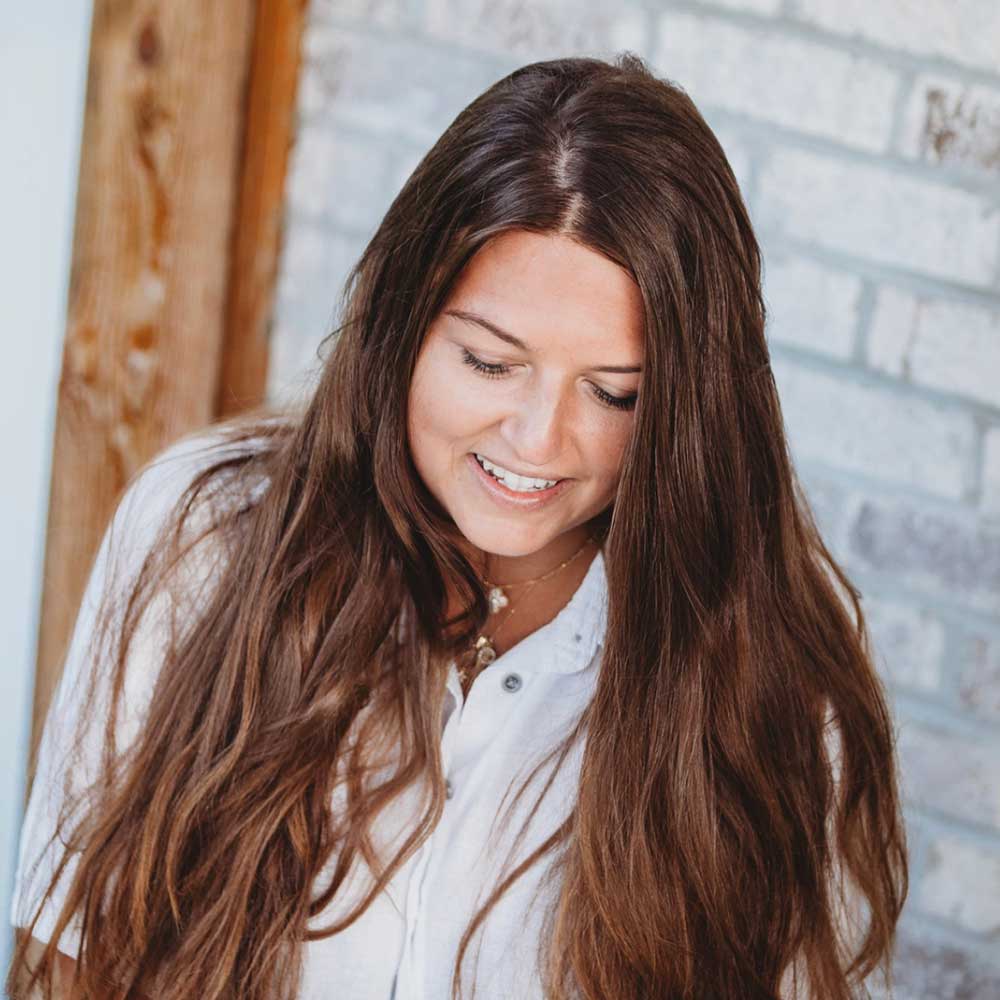 Gallagher Foxworthy
Gallagher Foxworthy is a curious seeker with a passion for exploring all things spiritual, natural, and enlightening. As a writer, she travels often in search of brief intoxications of inspiration. She appreciates the abundant wonders of the universe and loves learning through her clients. 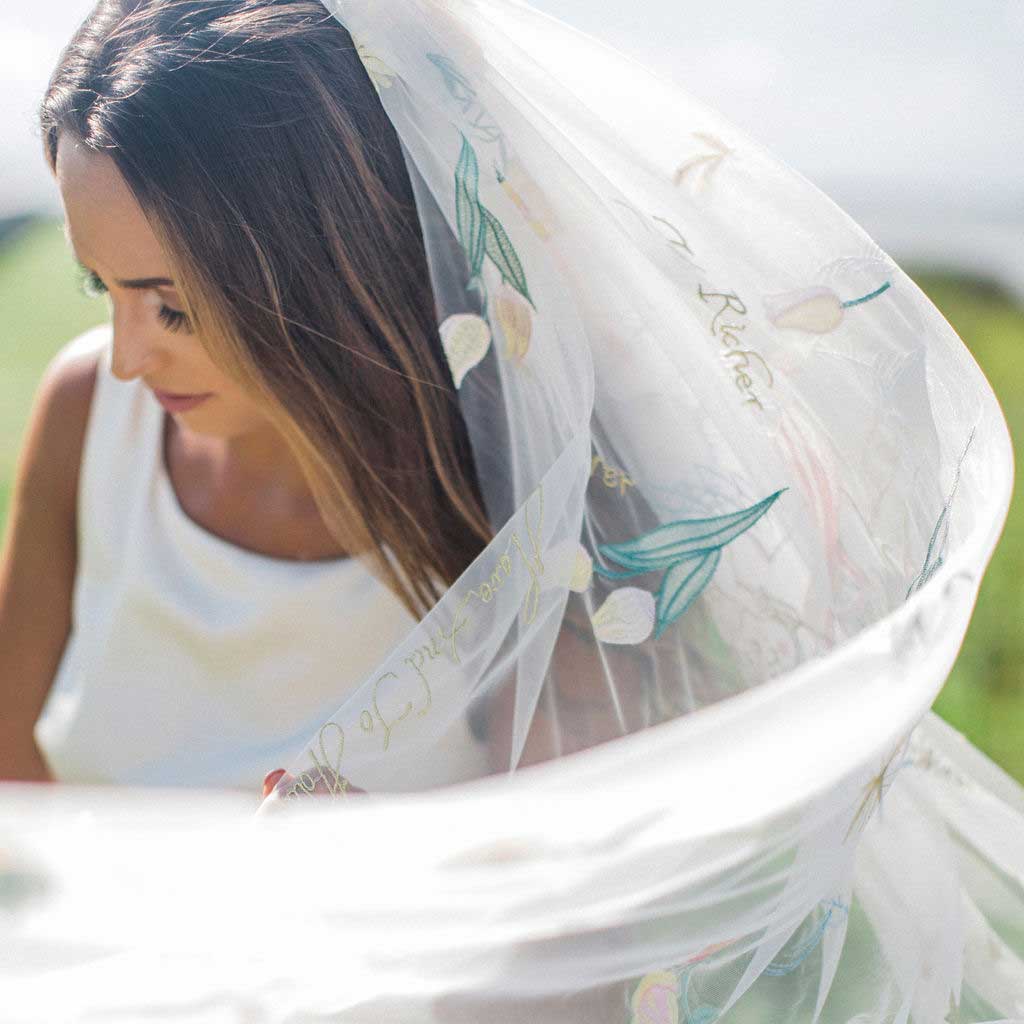 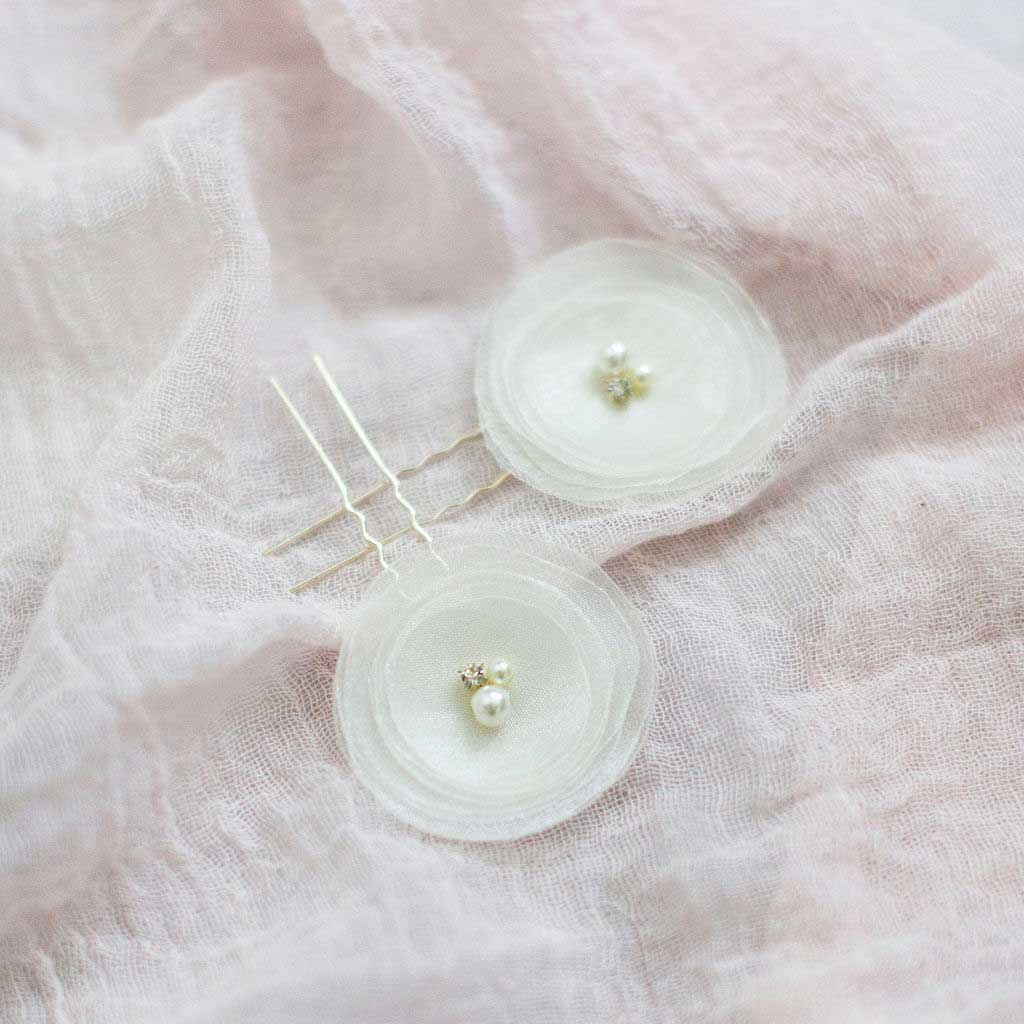 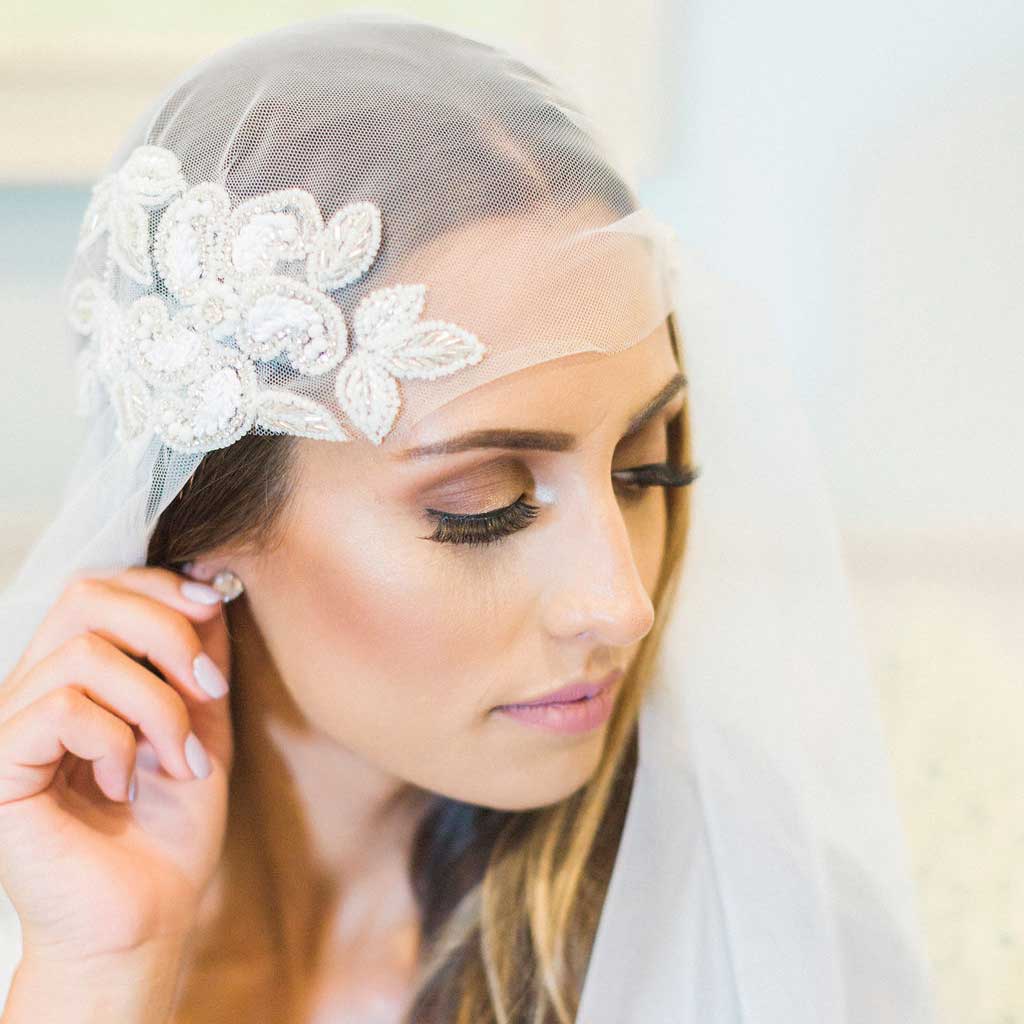 Best Elopement Wedding Destinations in the US Should You Postpone or Cancel Your Wedding? How to Pick the Right Wedding Veil Material